With a brake curtailing economy activity and liquidity scarce, in-house banks are proving their worth in maximising cash visibility. Treasurers from Infosys and Roche shared their IHB experiences at the latest webinar hosted by EuroFinance and The Economist Group

Government incentives are helping businesses come through the trauma of the Covid-19 pandemic. However in-house banks (IHBs), which can provide treasury with efficient and low-cost services, should have their credentials further enhanced in a time of crisis by strengthening their company’s resilience.

A webinar hosted by EuroFinance and the Economist Group, supported by Deutsche Bank, entitled ‘In-house banks: managing liquidity at times of crisis’ (19 May 2020) provided some insights on why this looks likely. Moderated by consultant and former CFO of Grupo Gloria, Alfredo Elespuru, the session invited Martin Schlageter, Head of Treasury Operations at Roche and Lalith B, Treasurer for Infosys, to share insights on the benefits of an IHB – although the latter’s comments are unavailable for publication.

Schlageter joined Roche 26 years ago and moved to his current role in 2004. He was invited to outline the liquidity set-up at the company and how it was better served by having an IHB.

The session opened with an online poll, which posed the following question with responses as shown.

How centralised is your treasury structure? 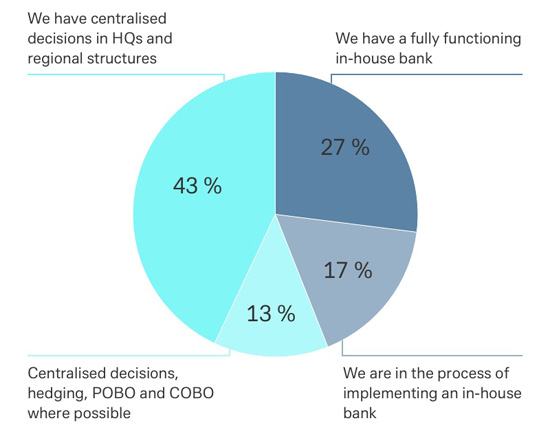 “One could say that there is room for companies to further enhance their current treasury set up and aim at an IHB,” comments Elespuru. “More than two in three respondents do not have an IHB set up.” The panellists then set the scene by outlining their organisation and its treasury infrastructure.

Schlageter commented that Roche’s treasury set-up shared several features with that of Infosys. The Swiss global pharmaceutical and diagnostics group has a centralised treasury department in Basel and no regional treasury centres, but there are several service centres around the world. Annual turnover is US$61.5bn, with the spend on research and development activities reaching US$12bn last year and a global workforce of around 98,000.

The Basel treasury centre is composed of two teams, markets and operations, with the latter in charge of cash management activities and the IHB. Where possible, subsidiaries bank only with the IHB and around a quarter of them have no external bank account. Schlageter added that the IHB is able to conduct payment on behalf of (POBO) for these entities, having replaced their external bank services with internal ones. In addition all “classic” IHB-features like intercompany payments or FX-hedging are catered for internally as well.

Asked about the key drivers that measure the success of an IHB he cited its internal services, which must be more efficient and cheaper than its external competition. Schlageter’s team is tasked with protecting against both treasury IT complexity and risk, where cyber security and preventing attempted fraud are at the forefront. As all communication with banks has been centralized globally via the IHB, there is a strong focus on IT and the aim is to be “smarter and more seamless” for the company’s subsidiaries than the services available from an external bank.

Coping with a crisis

The topic moved to the challenges of the Covid-19 pandemic and the second audience poll focused on the confidence placed in cash flow forecasts in the current crisis.

How far into the future are you confident about your cash flow forecast? 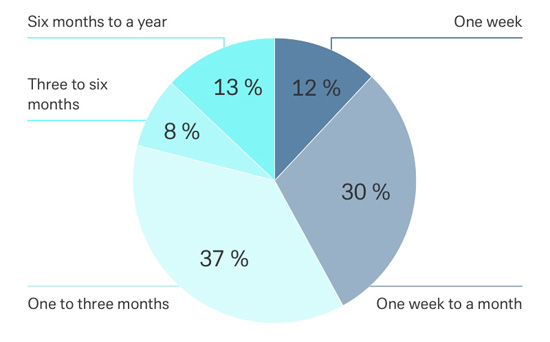 Moderator Elespuru commented that the poll’s skew towards shorter-term forecasts was understandable, given the prevailing uncertainty.

Roche enjoys a high level of visibility over its cash flows, said Schlageter, with its IHB structure “easing the pain” of the pandemic’s impact on treasury. The more internally organised a company, the better prepared it is to manage its liquidity and Roche has clear overall visibility of all cash and payments. Coupled with a centralised set-up it can prepare for the most adverse scenarios and react fast when necessary thanks to a highly-integrated IHB, which was first developed 15 years ago.

This meant that it was already established when the 2008 global financial crisis broke, and each crisis offers at least one positive by providing new insights and contributing to the evolution of cash forecasting accuracy.

With questions invited from the audience, panellists were asked: “Are you employing artificial intelligence in your cash forecasts?” Roche had not yet adopted it, responded Schlageter, but was considering how AI might be employed holistically using input from its various businesses and potentially improving its forecasting.

Asked how technology had enabled their company to manage uncertainty, Schlageter described it as the “backbone of the IHB and an enabler for Roche in running a centralised system”. It brings treasury – as a centre of excellence that speaks the same IT-language – closer to the business and “opens many doors” for the team. Roche’s treasury was also an early adopter of robotic process automation (RPA): the head of its back office moved over to the role from the company’s IT team. Schlageter added that thanks to technology, information was close at hand and treasury knew at any given time exactly where its liquidity was – both even more valuable facilities in a time of crisis.

Another audience question was on whether the centralisation process, which in many cases meant removing local banks from the equation, has affected relationships with banking partners.

Treasury’s priority is to keep the company happy rather than the banks, replied Schlageter, although Roche had of course retained its relationship banks during the centralisation process. Its task was also to convince the company’s subsidiaries that the IHB could offer them better services at a lower cost. For some of them this proved a little “out-of-the-box”, as having local banks had afforded these entities a degree of independence.

Despite this, there was a general consensus that centralisation is the right way forward and in an age when the focus on cybersecurity is growing a company can no longer afford to have multiple exit points. Inevitably, this will push some banking partners out of the equation.

Schlageter was then asked how the IHB contributed to the vital task of communicating with the company’s internal and external stakeholders. He said that communication lines were already well-established at Roche’s IHB as the day-to-day bank for 75 of its subsidiaries, “giving it a seat at every table where cash is flowing - and good communication is of course essential”. These communication lines were established in “calmer times” and were simply ramped up during a period of crisis such as now.

The conversation moved to supply chain disruption. Here again, Roche is well prepared as it has run a supply chain financing programme for the past decade and this has been ramped up during the crisis to support the company’s key suppliers and give them access to working capital. As Schlageter commented, the instruments are “sitting in a drawer” so they can be taken out and utilised as and when needed.

Regulations applicable in certain parts of the world impose restrictions on IHBs. While Roche’s subsidiaries in Australia, New Zealand, Hong Kong and Singapore have followed those in Europe in no longer using external banks, countries such as Saudi Arabia impose limitations – for example on the minimum number of services that a subsidiary may receive from an IHB.

Roche assesses each country’s regulation and what is permissible; whether it necessitates using an external bank or everything can be done through the IHB. Schlageter commented that the world is never ideal, but Roche adapts to it as much as possible and uses opportunities to pilot new developments, such as the first CNY cross-border Cash pool via a non-resident in Hong Kong. Discovering how much was permissible and keeping on top of regulation enabled the company to have a sustainable IHB.

Asked by an audience member if either panellist made use of virtual accounts. Infosys has yet to take them up, while Schlageter said that Roche uses them for collections on behalf of (COBO) so that it can internally segregate who is receiving money from whom. Banks able to offer virtual services are much sought after, he added.

The final question of the session was on whether centralised treasury and IHBs can remain fit for purpose in the future. Schlageter was confident that they can, provided that both retain the flexibility to react promptly to change. He added that regulators have supported Roche in those countries where it no longer uses an external bank, helped by the fact that following local regulation is the “number one mantra” when it is including new country into the IHB.

Roche assesses each country’s regulation and what is permissible; whether it necessitates using an external bank or everything can be done through the IHB. Schlageter commented that the world is never ideal, but Roche adapts to it as much as possible and uses opportunities to pilot new developments, such as cash pooling via a non-resident in Hong Kong. Discovering how much was permissible and keeping on top of regulation enabled the company to have a sustainable IHB.

While regulatory restrictions could prove destabilising, Roche’s treasury prefers to “see the glass as half-full, rather than half-empty”.

Proving adaptable to whatever may come was a good note on which to conclude the session, commented Elespuru. The session also supported the central premise that an IHB can be a game-changer if it can provide the company with funding, hedging, payments and other services more efficiently and at lower cost than are available from third parties – and particularly prove their worth in times of crisis.

The EuroFinance/Economist Group webinar, In-house banks: managing liquidity at times of crisis, was supported by Deutsche Bank and presented on 19 May 2020.The next webinar in the Global Treasury Leaders series will be integrating regulation and technology to support treasury digitalisation in Asia Pacific liquidity during a period of crisis and panellists will include the COO of the National Payments Corporation of India (NPCI)

Listen to the full recording of the podcast here: https://bit.ly/2ZiWOG3