With the coronavirus now pronounced a pandemic by the World Health Organisation and lockdown imposed on more regions and cities, what will be the impact on the global economy? Flow’s Clarissa Dann reviews extracts from Deutsche Bank research

In the words of Deutsche Bank’s Chief Executive Officer Christian Sewing, “We are dealing with a macroeconomic shock; the supply chains are broken, demand is collapsing in some sectors such as tourism, and there are also distortions on the oil market.”

He points out that the Bank’s economists report the impact is likely to be a near-term slump and they “expect the global economy to recover from the fourth quarter of 2020 onwards”. 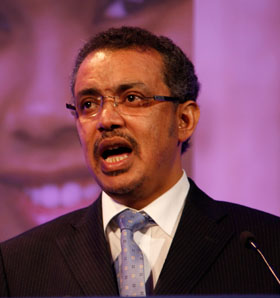 This article provides an overview of macro and market-related developments directly arising from Covid-19 – defined on 11 March by the World Health Organisation as a pandemic. Director General Dr Tedros Adhanom Ghebreyesus (pictured) called it “a crisis that will touch every sector”.

We are dealing with a macroeconomic shock

As Covid-19 rearranges the world order on many levels, situational data and regional responses change on a daily basis.

The WHO has a dedicated support page entitled Coronavirus disease (COVID-19) outbreak providing up-to-the-minute situation reports and technical advice on how individuals and communities can protect themselves. Its dedicated situation report page on the WHO website here provides an update of total and new cases every 24 hours. Another helpful source of situation reports is the John Hopkins Centre for Health Security in the US, whose daily reports can be accessed here.

On 16 March the WHO and the International Chamber of Commerce issued a joint call to action to the business community. This confirmed that the ICC would be sending regular advice to its network of more than 45 million businesses, to protect their workers, customers and local communities, as well as to support the production and distribution of essential supplies.

The impact of Covid-19 on the global economy and markets is unprecedented in the past 50 years in terms of its direct impact on global supply and demand, note analysts (while HIV/AIDS prompted lower market trading when reports of the virus emerged in June 1981, the main contributor at the time was an unrelated issue – the US and global recession). The timing of Covid-19 is, they add, particularly challenging following the trade war, ongoing US-China decoupling, the forthcoming US election, and the collapse in the oil price (although the latter reduces stress on the consumer and helps crude importers).

Around the world, global stock markets have lost US$20trn in the past three weeks (see below)

In an update published on 18 March, Deutsche Bank economists noted that the combination of the pandemic’s negative impact on China (a globally systemically important economy), together with the “more widespread and draconian containment measures to deal with the spread, the emergence of strain in the credit markets and the sharp tightening of financial conditions” point to “a severe global recession occurring in the first half of 2020. Aggregate demand, they add, will have plunged in China by the end of Q1, and in the European Area and the US by the end of Q2. “The quarterly declines in GDP growth we anticipate substantially exceed anything previously recorded going back to at least World War II.”

Sector research reports coming through as many corporates issue quarterly and annual results highlight difficulties in the tourism, aviation, hospitality, automotive, and some retail industries in particular.

Policy responses, the analysts explain have either little or no precedent. “The Fed and ECB, already low on ammunition, have gone pretty much all out on their responses,” they said. The Fed has cut interest rates to zero from 0.25% and both central banks have injected large amounts of liquidity into the money and credit markets to in an effort to diminish the prospects for another major financial crisis.”

They note that stimulus packages of 1.5% of GDP are already underway in Italy and France, and 1% in Germany, which is “engaging in substantial liquidity provision to private firms via loan guarantees”. In the US they foresee the fiscal action picking up once the scope of the crisis worsens, and that “automatic stabilisers plus demand stimulus measures could well exceed 5% of GDP and be implemented sooner than in the European Area.” China’s fiscal stimulus, including automatic stabilisers is expected to reach 3% of GDP, and Japan’s scope for stimulus might reach a similar level.

Other specific measures include:

Furthermore, on 18 March, the European Central Bank announced it would spend €750bn in bond purchases to calm sovereign debt markets. “Extraordinary times require extraordinary action…we are determined to use the full potential of our tools, within our mandate,” tweeted ECB President Christine Lagarde.

Timing of the Covid-19 shock to the global economy has been terrible, notes Deutsche Bank’s Capital Markets Strategist Tom Joyce. “With global manufacturing driven into contraction by the 2018−19 trade war, Covid-19 contagion has now induced a larger shock to the manufacturing and services sectors globally. The OECD has warned that Covid-19 could halve global growth to 1.5% in 2020, a level below that generally considered necessary for global growth. According to the International Monetary Fund, there have only been four global recessions since WWII: in 1975, 1982, 1991 and 2009. Though reasonably rare events historically, the exogenous shock of Covid-19 has “almost certainly pushed the global economy into only its fifth recession in the last 75 years.”

He advises corporates to complete scenario analysis for stressed liquidity and the availability of undrawn bank lines, to revisit pre-Covid-19 FX hedging positions for lower international revenue and cash flows, check their supply chain strengths and weaknesses and those of competitors – as weaknesses make many corporates vulnerable to M&A targeting.

Some clients are increasing their cash balances as a protective measure. Fabrizio Campelli, Chief Transformation Officer at Deutsche Bank, said at the Morgan Stanley European Financials Conference (organised as a virtual event) that some of the bank’s clients are de-risking and returning to cash “which increases deposit balances”. He added, “We are not seeing severe dislocations in liquidity markets. It is helpful to see central bank action to ensure plentiful liquidity across the system.”

China’s decision to destroy banknotes that have been circulating in high-risk areas for the Covid-19 virus has highlighted the risks of infection from physical cash. Indeed, the human influenza virus has been found alive and infectious on notes for up to 17 days.

In a research report published 5 March, Deutsche Bank analyst Marion Laboure points out that “The recognition of the infection risk will likely accelerate the push towards digital payment systems across the world. This is particularly the case as the elderly, who are the most susceptible to the virus and have been the most reluctant to embrace digital payments.”

Laboure maintains that the virus’ proximity in Asia means its effect on the region’s payments systems could be felt in the near term and sooner than in the US and Europe. It will likely accelerate the trend away from plastic cards and towards digital wallets and smartphone payments.

She cites several studies that have shown the average European banknote contains 26,000 bacterial colonies, including strains such as e.coli and salmonella that can lead to food poisoning. While the newer polymer-based banknotes have fewer bacteria than the cotton-based ones, she points out, “All bank notes are long-term conduits for disease because they are used repeatedly for years.”

Impact of Covid-19 on the global retail sector

Over the weekend of 14-15 March, retailers and brands made a flurry of announcements in stepping up their efforts to help limit the spread of Covid-19, including store closures for some and limited trading hours for others. In addition, certain geographies including the country of France and certain counties in Pennsylvania are restricting 'non-essential' retail.

With consumers focused on stocking up on groceries and other basic essentials, Deutsche Bank analysts believe the discretionary retail sector will be very challenged near-term. They estimate that the month of March, on average, represents around 40% of sales in Q1 and around 9.5% of the full year. Unlike other events such as snowstorms and hurricanes, however, they are not certain that the shock will be temporary and easy to quantify, as hits to consumer confidence (especially small business owners, workers relying on tips, and those heavily invested in the markets) and balance sheets could have more lasting ramifications.

Outlook in the coming weeks

This level of uncertainty to the world as we know it is uncharted territory, and everyone has to balance personal safety and economic survival. Alan Ruskin, Global Head of G10 FX Strategy provides this thoughtful reflection:
“There is no equivalent exogenous shock the world has gone through in the post-Bretton Woods period, and certainly not in the era of globalisation. Just-in-time global supply chains will present unique production challenges. Workplace disruption, trade interlinkages, business uncertainties, profit warnings, inability to pay, and capacity to service credit are all related supply side issues that, in turn, generate demand effects on employment/hours worked, disposable income, wealth and confidence effects.”

While nobody can predict the full impact of the virus on the global economy right now, how the world recovers depends on how market participants and governments tackle the problem. In the meantime, businesses need to prepare for the eventual recovery.