Wind energy keeps the lights on in Texas

The volume of US wind industry projects under construction set a new record in Q1, according to the American Wind Energy Association. flow reveals how, despite the challenges of Covid-19, a developer recently secured financing  for a wind park in Texas, illustrating industry confidence in renewable energy as a source of long-term power generation

From the opening montage of the US prime time television soap drama Dallas, which first debuted more than 42 years ago, frames featuring businessman JR Ewing, oil wells and cattle ranches encapsulated what Texas used to be famous for. The West Texas Intermediate (WTI), a grade of crude oil, has served as the US oil benchmark for more than three decades. But fortunes changed when Covid-19 sent commodity prices tumbling.

A recent flow article Covid-19 and commodities revealed the extent of the impact a halt on production had on the WTI. At one point on 20 April, the May contract for the benchmark had started the day at US$17.85/bbl traded at –US$39.55/bbl, remaining in negative territory for around six hours before recovering to US$1.43 the next morning. Oil is traded on its future price and given that futures contracts were due to expire on 21 April, traders took steps to avoid having to take delivery of the oil and incur storage costs when storage capacity is running out fast.

While dark clouds continue to loom over Texas’s oil wells, fortunes look a lot better for its growing renewable energy industry, which has seen wind farms increase in number since the first farm was erected in Big Springs in 1999. With more than 40 farms1, Texas is the world’s fifth largest wind energy generator2 with the installed wind capacity exceeded only by that of the United States overall, China, Germany and India, the state is seen as a profit-driven leader of renewable energy commercialisation3.

Texas forms the majority of the 1800 megawatts of new wind power installed in the US in the first quarter of the year, with 540 megawatts of new projects installed, according to recently-released figures from the American Wind Energy Association (AWEA). The Association shows that the volume of projects under construction set a new record with 24,690 megawatts under construction across the country.

The Wind Powers America First Quarter Report 2020 further reveals that US project developers installed more than double the amount of wind capacity in the first three months of 2020 than over the same period in 2019. Eleven new wind projects totaling 1,821 megawatts became operational during the first quarter, enough to power 560,000 American homes and more than double the installations from the first quarter of last year Developers also started construction on 4124 MW of wind power, bringing total construction activity to 24,690 megawatts.

“America's largest source of renewable electricity is poised to build on its 50-state footprint of job creation and economic development, and to continue bringing reliable, clean, and affordable electricity to communities across the country," said Tom Kiernan, CEO of the AWEA. "While we continue working to mitigate the challenges of COVID-19, the wind industry is committed to investing in the US economy and keeping the lights on for millions of Americans."

In 2019, 7.3% of electricity generated in the US was from wind energy (see Figure 1), highlighting its potential to further penetrate a market that is still dominated by fossil fuels (nearly 63%) and nuclear energy (about 20%).

Figure 1: US utility-scale electricity generation by source, amount, and share of total in 2019 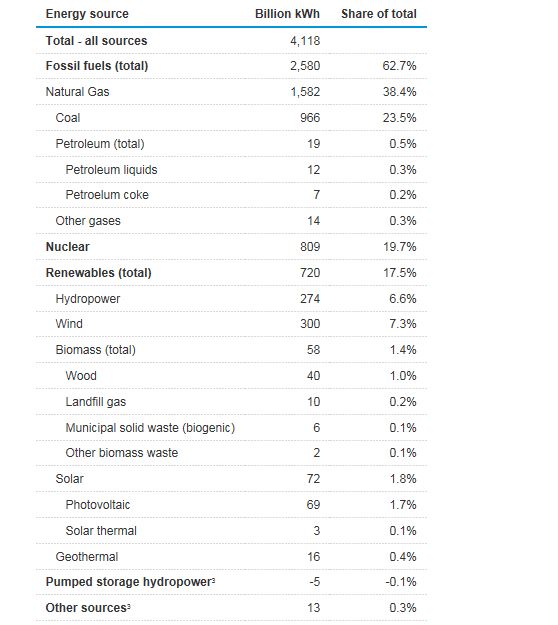 11 new wind projects totaling 1821 megawatts became operational during the first quarter, enough to power 560,000 American homes and more than double the installations from Q1 2019. With Texas in the lead, followed by Iowa, Illinois, and South Dakota, the state has also created over 24,000 jobs for local communities and for the state. Farmers are encouraged to lease their land to wind developers, creating a new revenue stream for the farm.

One such developer is German-headquartered global renewable energy group BayWa, which in March laid the groundwork for building on its current portfolio of 29 projects – with 390 MW of installed capacity already in the US – by successfully securing financing for a new wind farm in North West Texas.

The 250 MW farm, called the Amadeus Wind Project, will be located in the Kent, Fisher, and Stonewall counties of Texas. The Project will be a source of renewable energy for over 75,000 local homes, and will have a lasting impact of sustainability on the region as a whole. According to BayWa, Amadeus’s environmental benefit could be considered the equivalent of planting 17 million trees annually, and will create hundreds of jobs during the construction period.

The clean energy produced by the Project will also contribute to Texas’ continued lead in wind power generation with the state contributing more than a quarter of America’s total wind generation, according to the US Energy Information Administration (EIA)4. Also, BayWa’s press release reports that Amadeus Wind is expected to keep upwards of 680,000 metric tons of carbon dioxide from being released into the air each year5.

The most unlikely scenario

While many project finance deals are complex structures that are designed to react to scenarios such as changes in the economy, interest rates, and geo-political events, none of their originators could have anticipated a global pandemic. Yet, despite the threat that Covid-19 posed to the administration and closing of the transaction, all deal parties were able to successfully push ahead, getting negotiations to the finish line.

Having initially secured a tax equity commitment and hedge agreement in 2019, the spread of the coronavirus pandemic threatened the project’s construction loan arrangements. As concerns spread throughout the US, the deal parties considered the evolving situation as a force majeure event that could keep construction from being executed in a timely manner.

While suppliers were asked to provide feasibility notices for the proper delivery of necessary materials and plant construction, Deutsche Bank Trust Company Americas (DBTCA) was engaged to fulfil its critical role as account bank. The bank’s Project Finance Agency team facilitated open lines of communication and a strong business continuity plan to help guide the deal through the crisis. As the developer’s legal counsel continued to negotiate the structure of the construction loan with the lender, credit market conditions steadily deteriorated, but both sides successfully partnered to agree on adjustment to the original loan.

DBTCA’s Project Finance Agency demonstrated their experience and resilience by ensuring legal documents were duly reviewed in a timely fashion, project accounts were opened in due course, and the closing funds flow was vetted and smoothly processed on the closing date. These services were escalated through split team operations, which acted in a quick and decisive fashion. Transaction management, client on-boarding, sales and client services and operations teams remained seamlessly coordinated while working from home during this unusual and challenging situation. DBTCA will continue to service and administer the Amadeus Wind accounts for the lifetime of the project.